I first had the pleasure of meeting Joe Buchdahl in 2010. Here's my review of his latest book published in December 2021. 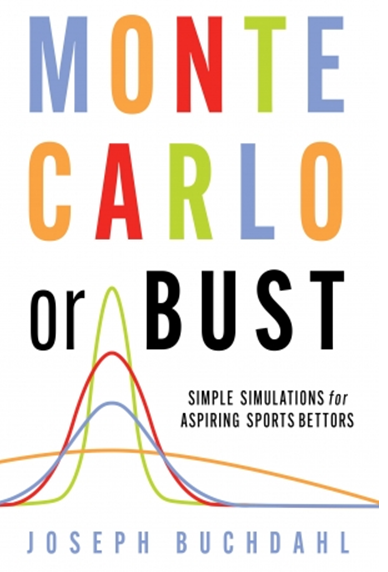 I’ve been running my own football ratings service since 2006. I was inspired to do so after reading Joe Buchdahl’s first book, ‘Fixed Odds Sports Betting’.

Whatever Joe writes is essential reading for anyone aspiring to be a successful bettor. This book is no exception.

The aim is to demystify probability, uncertainty and luck and their roles in betting.

The first two chapters listed below provide valuable insights into understanding probability and statistics, giving the reader a basic grounding. The book is primarily designed for those who are ‘mathematically inclined’. If you’re not, you may find some aspects heavy going. Nevertheless, this shouldn’t detract from the book’s overall value. There’s plenty in there for everyone.

Joe explains the modelling behind a penalty shootout. Get your Excel spreadsheet ready if you want to learn more about RAND, IF, SUM, and COUNTIF. You won’t need your spreadsheet to see why, amongst other things, 29.8% of teams will score four penalties in a shootout. Items covered include modelling the outcome of the Premier League, the unlikeliness of Leicester City’s 2015-16 Premier League title, plus simulations for Tennis, NBA Finals, and the US Presidential Election. In the author’s words, “In terms of betting systems, this is probably my best work.” He is referring to the Wisdom of the Crowds bet selection methodology he first published in 2015. There have been 11,894 qualifying bets to date. Much to do with the fundamentals of profitable betting are summed up by this relatively simple system. The chapter begins with, “It’s much easier to doubt yourself after a series of consecutive losses. This is the psychology of loss aversion. The cure is to ignore your results, at least in the short-term, and make use of proxy measures of expected value like the closing line to tell you whether to trust your methodology.  Solid grasp of the expectation should turn what might come as surprises to many bettors into mere frustrations at the fickleness of bad luck, noted and then filed away in the recesses of the mind where they are unable to wreak havoc with one’s emotions.”

This is most certainly sound advice as short-term bad luck can last much longer than most people imagine.

Drawdowns and The Risk of Ruin also come under scrutiny. Speaking from experience during the 15 years of running my service, this is the subject the general public ask me about most. The Martingale system is righty debunked. Level stakes, Variable stakes, and the Kelly Criterion are all dissected. One of my soap box issues is covered! Read how the public are exploited by Tipster Supermarkets taking advantage of Survivorship Bias! This chapter lists some of the simulations Joe has played around with over the years to improve his own understanding of a betting market. An interesting study of League Two football matches shows profits from a lucky streak of 2,760 wagers between 2012/13 and 2016/17 was then countered by an equally unlucky streak covering almost 1,600 bets between 2017/18 and 2019/20. The end result was a reversion to the mean but it took some time to get there!

Joe deduces, “Given that the original lucky sample size was 2,760, do you see how easy it is to be fooled by the law of small numbers? ‘Small’ is relative. It can be a rather big number indeed.”

The chapter draws to a close with, “Learning that betting is largely a game of luck is not something people want to accept. A large dose of overconfidence usually helps them circumnavigate this message. For most, however, their prospects of becoming a winner through real expected value rather than luck will not change. If you are one of those who wants to do more than just live in this illusion, let me offer you five points for consideration…”.

The five point list can be found on page 346. “Teaching people to win at betting who don’t have a mathematical background is arguably an impossible task. Perhaps that is as it should be, since to win in betting, like any other walk of life, takes hard work. Those who work the hardest, and in this case make the effort to understand the mathematics of probability, will be the ones most rewarded,” brings the book to a close.

Final Summary:
In an industry often filled with misinformation and spin (I could have used more graphic phrases but won’t!), Joe Buchdahl is the go to man if you want to know the truth. He has the experience, knowledge and intellectual wherewithal to put you right. Whilst some may proffer he has a somewhat negative attitude towards the prospects of being a long-term winner, I prefer to take the view his attitude is a realistic one. Anyone underestimating the challenge is almost certain to fail.

I doubt this is the type of book you will read in one go. I would also suggest it’s probably not good bedtime reading either unless you want to wake up at two in the morning with a buzzing head! It’s a serious book for serious bettors; something you will keep returning to over and over again. As mentioned earlier, not all of the in-depth analysis will be for you but even if you don’t get busy with your spreadsheets, you will learn a great deal and be a better bettor for reading Monte Carlo or Bust.